Too Old For Fake Uggs

I've come to a sad realization.  I live in Wisconsin and it's time that I buy real boots.  Snow boots.  No more fake Uggs. 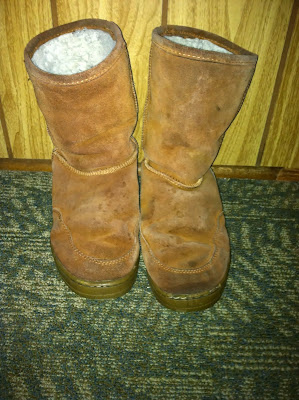 With the first (luckily, small) snow fall last night, I wore my boots on my morning walk with the pups only to remind me that my feet get absolutely soaked in them.  I've had them for several years now, so it's time for them to retire.

I bought them at Target for twenty five-ish dollars.  I can't complain that they have lasted until now!  As you can see from the picture, they have been used generously.

So, I went out shopping this morning in hopes to find the exact same cheap pair.  Target, nope.  Payless, nope.  I found a pair at Kohls that came very close... 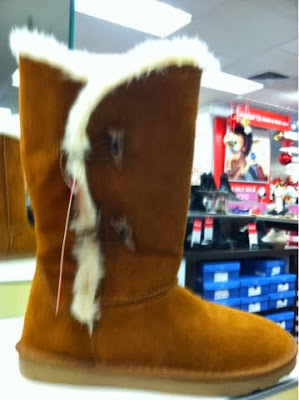 (sorry for the blurry picture)

I tried them on, and while they were very comfortable, I looked at myself in the mirror and something just wasn't right.  I was pretty bummed when I realized what it was: I am too old for fake Uggs... Boots with the fur... Ugh.

So!  It looks like I'm in store for some legit snow boots.  It makes sense, I don't know why it took me so long to get to this point, I live in Wisconsin where mountains of snow are expected every winter.  Yet I go out with my suade, fake, furry boots to shovel, brush off the car, walk the dogs, and then wonder why my feet are cold and wet.  Dummy.

Have you ever realized you were too old for something?

Anyone have any suggestions on reasonably priced (and somewhat cute) snow boots?

I'm willing to give up the teenage look, but still want to look cute! :)
Posted by Life After Morning Coffee
Email ThisBlogThis!Share to TwitterShare to FacebookShare to Pinterest