How can I not love coming home to these two!? 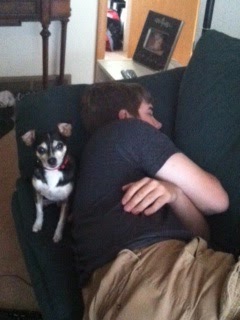 2 years... TWO!  Terry and I have been together for two years tomorrow.  However, since we both work and have a kickball game tomorrow night, we decided to celebrate tonight :) We started out the evening with dinner at a new restaurant: Picanha The Brazilian Steakhouse.  While it was great food, I was disappointed in the price.  It was all-you-can-eat, so I'm not sure what else I was expecting but our bill (including the tip) was $70!  It just wasn't $70 amazing to us... We would definitely rather go to one of our favorite restaurants at least three times for that amount of money.  However, I was pretty excited about the tongs they give you! 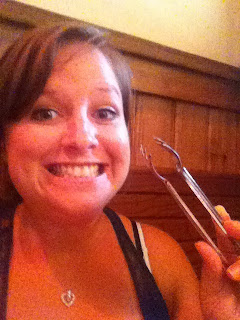 We then went to Verizon where (as a gift to him for our anniversary) he picked out his new phone.  He went with the Galaxy S3 and has been playing around with it since we got home.  New toy for him = blog time for me!

Before he started playing away, he did let me open up a cute little anniversary gift: 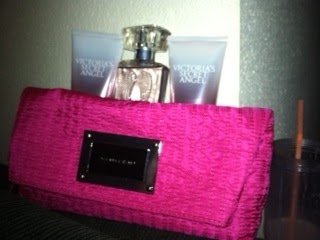 The new Victoria's Secret Angel perfume set!  Which came in the cute pink purse :) We smelled it last week while walking through and I thought it was such a pretty, light scent.. and surprise! I have it!  Thanks babe :)

Now, while Terry plays on his phone and I play on the computer, we are watching "How to Lose A Guy in 10 Days" ... What kind of messed up couple are we?!  If I haven't lost him in the last two crazy years with all of my ups and downs, I might have a keeper.  One of my favorite quotes about men is, "If he can't handle you at your worst, he definitely doesn't deserve you at your best."  Or a modified version of the quote that better fits me.. "If he can't handle you in sweat pants, he doesn't deserve you in your wedding dress."

Lastly... but surely not the least important, I want to give a shout out to an AMAZING friend of mine -- Dustin!  We have been such close friends and at times inseparable for 13 amazing years.  No matter how busy our lives seem to get, he is one person I can always count on being able to pick up wherever we left off.  And today is his birthday :) 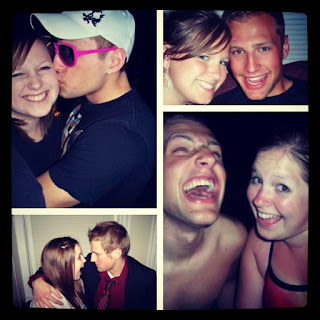 I hope this man had a great birthday - I was lucky to see him this past weekend at the water-ski tournament but already cannot wait to see him again! :) Love you Baby D!
Posted by Life After Morning Coffee
Email ThisBlogThis!Share to TwitterShare to FacebookShare to Pinterest