What a fast weekend!  Terry, Parker, and I headed up north to the lake for some fun in the sun with the family.  My dad was up there along with my aunt and uncle, two cousins, and one of my cousin's friends.  While it was a small group of us, we managed to have a great time.  It was Parker's first time camping up north and he did GREAT with only one instance of him running off because he saw a butterfly.  He got to meet Lexus, my aunts dog.  We decided they are going to be boyfriend/girlfriend.
Another problem Parker had was the fireworks... poor, little guy did NOT enjoy the beautiful firework display that Terry put on.  He was crawling into my hood, sitting on my head, and shaking :( While I felt bad for him.. it was absolutely adorable.
Besides the fireworks, he looked extremely happy the entire time.  He got to lick a lot of yummy plates, share a cheeseburger with my dad, and be free from his leash.  He also enjoyed the camper we stayed in and even though Terry and I barely fit in the bed together... he made sure to fit right in with us instead of in his crate we so graciously packed for him.
I also managed to capture this sweet moment during nap time...
It was also great to get some water-skiing in this weekend.  It is the fourth of July weekend, yet it is only the second time I have been able to ski this summer.  I decided to both swivel and barefoot... and didn't manage to fall once!  So great to land flip turns, hand-to-hands, overheads (two handed and one handed), presses, and meltdowns!  Also got up both times barefooting and went across the lake at sunset! 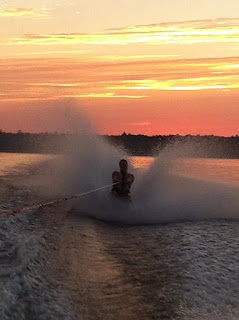 My aunt's new MasterCraft boat has an AWESOME wake so I think that contributed a lot to the ease of getting up on my feet ;)
While I did not take any pictures of it, Terry and I went on a nice 5.5 mile bike ride on Saturday evening before dinner to a bridge and back.  We stopped at the bridge and looked at the creek and ended up seeing a huge snapping turtle making its way out of the stream!  Pretty cool!  So after swiveling, barefooting, swimming, and biking... my body is pretty wiped.  Oh, and lighting off the roman candles while screaming out Harry Potter spells at each spark took a lot out of me as well ;)
It definitely was a great weekend and I was happy to spend an entire weekend up there rather than just a day.  The weekend flew by and now it's time to go back to work tomorrow and get back in the gym afterwards!  Looking forward to going to BodyPump tomorrow with some gals from work :)  Hope everyone had a fun and safe 4th of July celebration!
Posted by Life After Morning Coffee
Email ThisBlogThis!Share to TwitterShare to FacebookShare to Pinterest