Some crazy and unpredictable changes have occurred over the last week or so :)


First off.. and probably the most exciting thing to me.. We added a little addition to our household 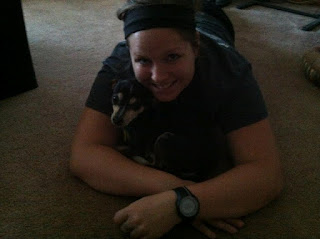 Sitting on Facebook one day, I came across the Humane Society's album "Found Dogs".  I occassionally look through this just to see what fun critters make their way in since I used to volunteer there in college.  Well, needless to say, this little guy was on there.  He had been turned into the humane society as a stray in early May and no one had claimed him!  I decided to ask Terry if he wanted to go see the animals at the humane society before our bike ride at Lowes Creek one day, and he agreed!  We were surprised to see that he had not been adopted yet and we instantly fell in love with him.

He is so quiet and loves to cuddle, yet loves to get out of the house and go for long walks.  Perfect combination :)  While he's defnitely not my new running partner (only because he weighs an entire 7 pounds and wouldn't keep up), he is definitely a perfect reason for a morning, afternoon, and evening stroll.  As many of you know.. I am NOT a morning person.  At all.  I'm not putting this lightly... I really hate waking up.  However, this little guy seems to make morning coffee walks extremely tolerable (for now.. he he) 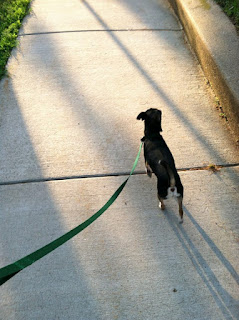 The humane society suspected that he is already 9 years old and named him Parsnip (we will be changing that asap).  I have been calling him my little "mister".  We have been playing around with a couple of names and Parker might be the overall winner.  We wanted to get to know him over the next couple of days before deciding on a name.  I took him to the vet yesterday for his first checkup and they say he might be younger than 9, maybe even 5-7.. which would be great!  Without the proper care, his teeth are in pretty bad shape (which is probably why they suspected he was much older than he really could be), so he will be needing deep cleaning and proper dental care ($$$).  He will also need to be neutered since he has not had that done yet.  A big reason why no one would adopt him is because he is a cryptorchid, meaning one of his testicles did not drop when he was a puppy.  This is pretty common in his breed, but the neutering surgery can cost a lot of extra money since the vet has to be pretty invasive in order to find the testicle that never dropped.  It's a bummer that he never got proper care before since this neutering should have been done when he was much younger.  The surgery is a must because leaving the testicle in his abdomen gives him great chance of getting cancer.  So, we decided that we would do both his neuter and dental cleaning in one surgery so that he only has to get knocked out once and hopefully he will make it out strong!  Definitely worried about this little guy.. he's the sweetest thing!  Hopefully we can get this surgery done at minimal costs (please pray for that!) and he can live out a healthy life with us :)

Another piece of exciting news: I got a promotion at work.  Very small, but a promotion nonetheless.  I am now promised 40 hours per week and even got a raise.  Since I have graduated college, I have always remained a part-time staff, only because there were always enough open hours for me to acquire between 30-50 hours per week.  However, I had to depend on myself for finding those hours and picking them up.  Now, my supervisor is responsible for my schedule and finding me 40 hours per week.  One thing less to worry about, however I am still keeping my eye out for a higher paying job that is more dependable since I don't know how much longer my job will be available (I explained this in my last post).

Last, but not least, Terry and I have an appointment on Monday evening to view a few houses!  We have our choices narrowed down to 4 houses (but still keeping our eyes open for other choices), so we are taking the next step and checking them out.  Pictures can be pretty deceiving online, so I'm interested in seeing what house ends up being my favorite after seeing them in person.  It's pretty scary because this is obviously something neither of us have ever done, but it's almost stupid to be paying rent right now for a tiny apartment when for the same price (or lower) a month, we could own a full house with a garage and a yard for the pup to run around in.  Wish us luck!

I want to give a shout out to one of my favorite people in the entire world... My niece and God-daughter, Chloe. 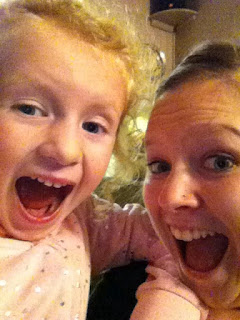 She turns SIX next week and I can't believe how fast the time has gone.  She never fails to put a smile on my face and I love seeing her personality grow every day.  Love you, girl!

Hope you all have a great day :)
Posted by Life After Morning Coffee
Email ThisBlogThis!Share to TwitterShare to FacebookShare to Pinterest