100 degrees!? Ugh... Way too hot.  But it beats 0 degrees!  While this last weekend was a hot one, it was great :) Two of my closest friends came to town so it was a breath of fresh air to be able to chat and visit with them.  We went out for sushi at a new restaurant in town.  I am proud to say that I introduced Terry to something new and he loves sushi now :)  He decided to be brave and try a new type of sushi called the Tuna Tartar.  It came out super cute... 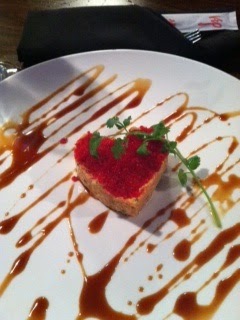 However, that's practically what it looked like when we were finished with it.  I tried a little bit and it was WAY too spicy for me (it was made with spicy tuna.. and for someone who thinks adding ketchup to things adds a kick.. it was not for me).  Unfortunately, no one liked it.  Terry dubbed the Tuna Tartar as a "tar tar tarrible idea".. haha!

The next night, we all stopped over at a friend's house for a few games since it was her last weekend in town. We decided to bring a $4.00 bottle of wine (which did not get finished since it tasted like $4.00 wine.. blech) and Parker! 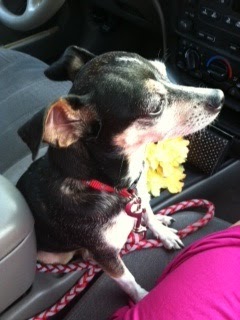 Yes.. that is him.. sitting in the cup holder in the car.  What a weirdo!  He is most comfortable in most bizarre places! 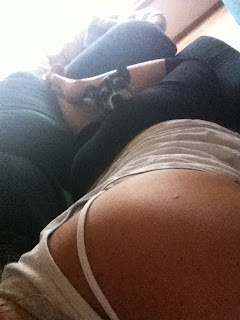 Like my butt.  But that dog makes me fall more and more in love with him every day.  As my aunt says.. "It's crazy how much you can love a dog..." I am very nervous for Parker since after this next weekend, he will be having his surgery.  He will be getting neutered (which may have complications since he is a cryptorchid.. see this post) and some invasive teeth cleaning.  Poor little guy... I am so nervous for him!

I am also nervous because on Friday, he is getting his blood work done for his surgery, then we will be dropping him off at Terry's parents' house for the weekend.  Terry and I are going on a mini-vacation for the best weekend of the summer.. Water-ski state! While I am very excited for the time away, I will be missing Parker a lot and hope he will be okay without us.  First time away from home since we got him.. sniff sniff.. I have a feeling he will take it better than I will (I will not cry, I will not cry, I will not cry...)

I know it's only July.. But August is coming up fast and then it will be September and October = FALL! My favorite season EVER!  I have been dreaming of fall treats and can't wait for pumpkin to start hitting the shelves again.  Lucky for me, I still have a couple of cans hiding in my cupboard from last fall.  So, I made myself a delicious pumpkin spice protein smoothie last night.  It was so good.  For those Culver's custard fanatics out there like me, it tasted just like a Culver's pumpkin spice shake! 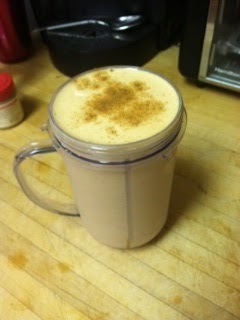 With the help of these yummy concoctions, I hope to be saving a lot of money and calories this fall.  Because let's be honest.. I was going through the drive-thru of Culver's on almost a daily basis once they released pumpkin shakes.

Off to dart league!  The team we are supposed to play tomorrow night can't make it, so we are playing tonight instead.

Have a good one!