Sorry that it's been so long since my last post!  Apparently coming back to the midwest after our trip to Mexico was nothing worth writing about ;)

So what better way to revisit the blog with than with a race recap!?

Last month, I participated in the Eau Claire Marathon Relay with my fellow CrossFit friends Brittany, Kayla, and Molly.  It was the first Sunday of May and between the four of us, we completed the full marathon, each running between six and seven miles. I volunteered to run the second leg of the race which happens to be the longest at seven miles and pretty dang hilly. 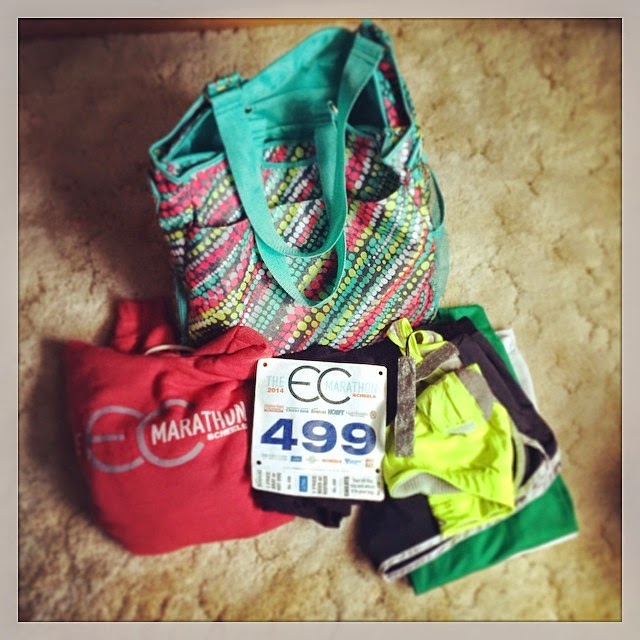 I decided to do the second leg of the race because my brother was running the second leg as well on a relay team with his buddies. We were able to do a few training runs together and it was fun to spend some extra time with him! Bobby and I both wanted to run around the 9:00/mile pace so it was nice to train with someone who had the same goals.

The start of my run had an unfortunate start since we did not hear our number be announced (warning us that our team member was coming so we could be ready for a quick transition/hand off).  All of a sudden, Brittany ran past before I had my sweatpants off, shoes tied, or music ready!  I yanked my pants off and started running after Brittany to tell her she was done and I was off!  I ran the first two miles in 8:30 min/miles because of the adrenaline rush of the start and I knew I couldn't maintain that pace for over seven miles, so I convinced myself to slow down a bit.

Luckily, Bobby and I were able to run the exact route two times before the race so I knew exactly what to expect.  However, we practiced the runs in the rain and cold, not beautiful weather!  It got very warm and I regretted wearing a long sleeved shirt under my t-shirt, but luckily it wasn't unbearable.  The hills were rough but like I said, I knew when to expect them and was able to mentally prepare for them.

The volunteers and cheering spectators were AWESOME and gave me an extra oomph throughout the run.  I finished the route in better time than our practice runs at 1:07.  I ran at a 9:13 pace, which is my best pace for a longer run!  Great news - Bobby finished in nine minute miles, as well!  So we both hit our goal! 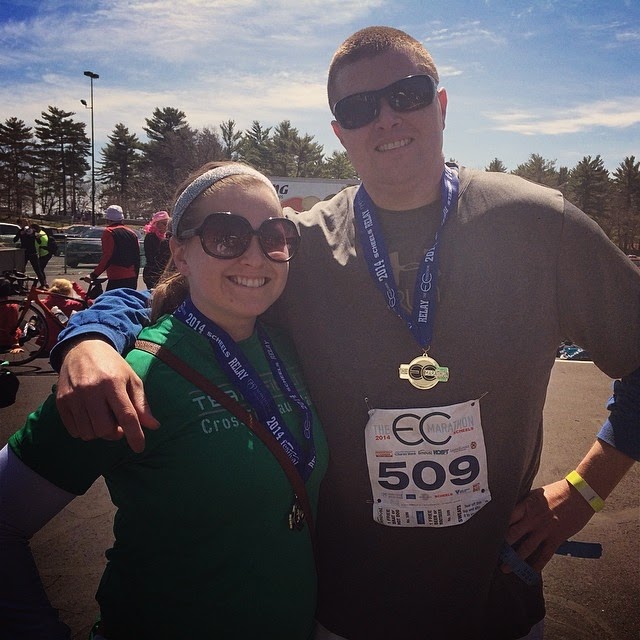 Kayla ran right after me then we waited for Molly to come up Carson Park hill so we could cross the finish line as a team. 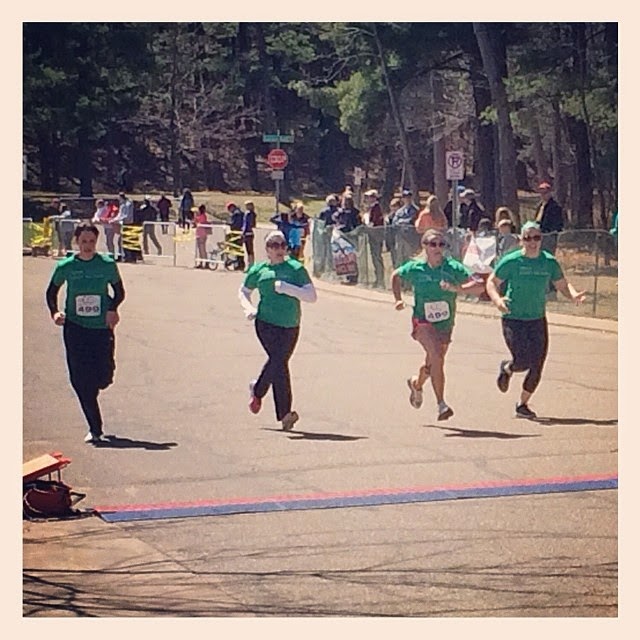 All the ladies did amazing and we finished in the top half of female and overall teams! 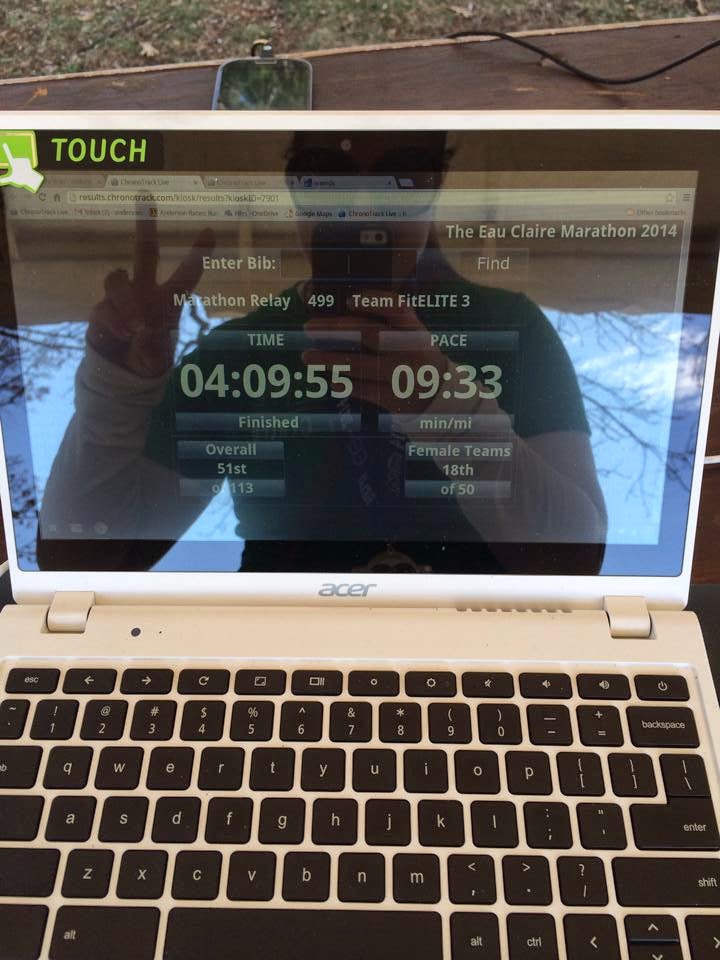 I couldn't have asked for a better team! 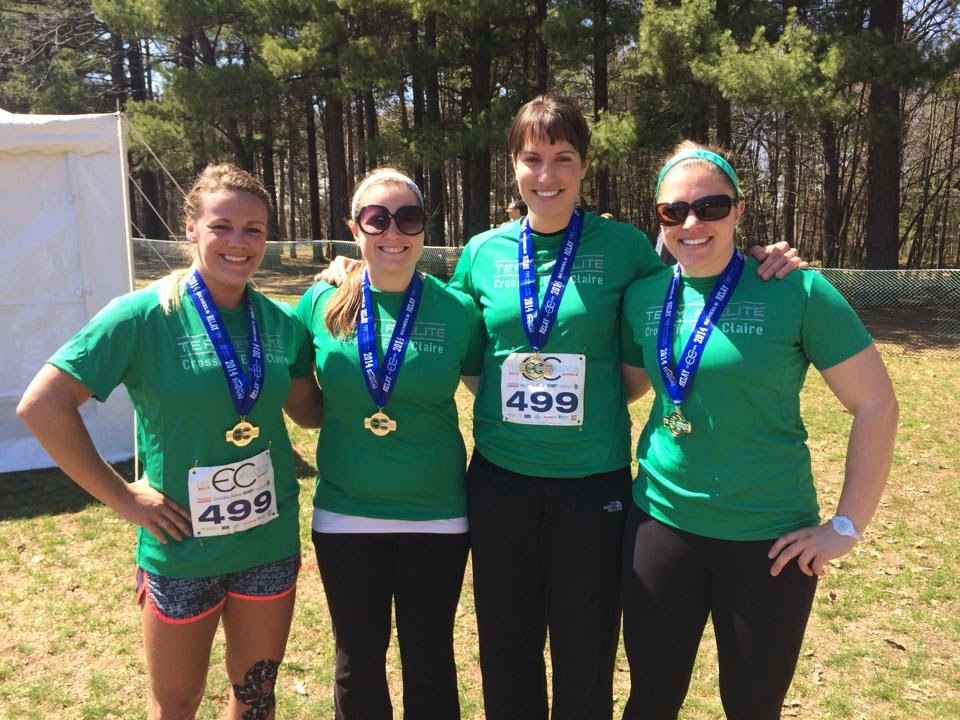 Or a better community to represent! 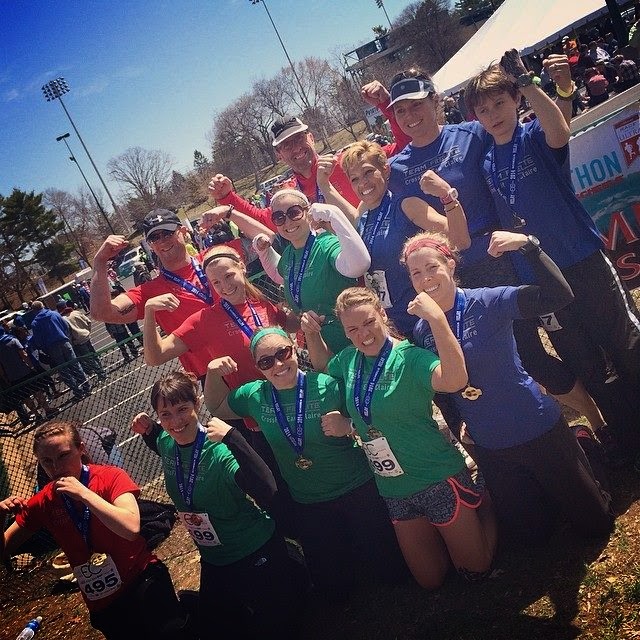 FitELITE had two other teams running and it was fun to stick together and cheer each other on all morning!

The weather couldn't have been more perfect that day.  Cooler in the morning, warm and sunny for the finish.  After the long winter, it was fun to see everyone hanging out in the sun after the race!  The EC Marathon had an awesome beer and food tent set up with free beer and brats for all runners. 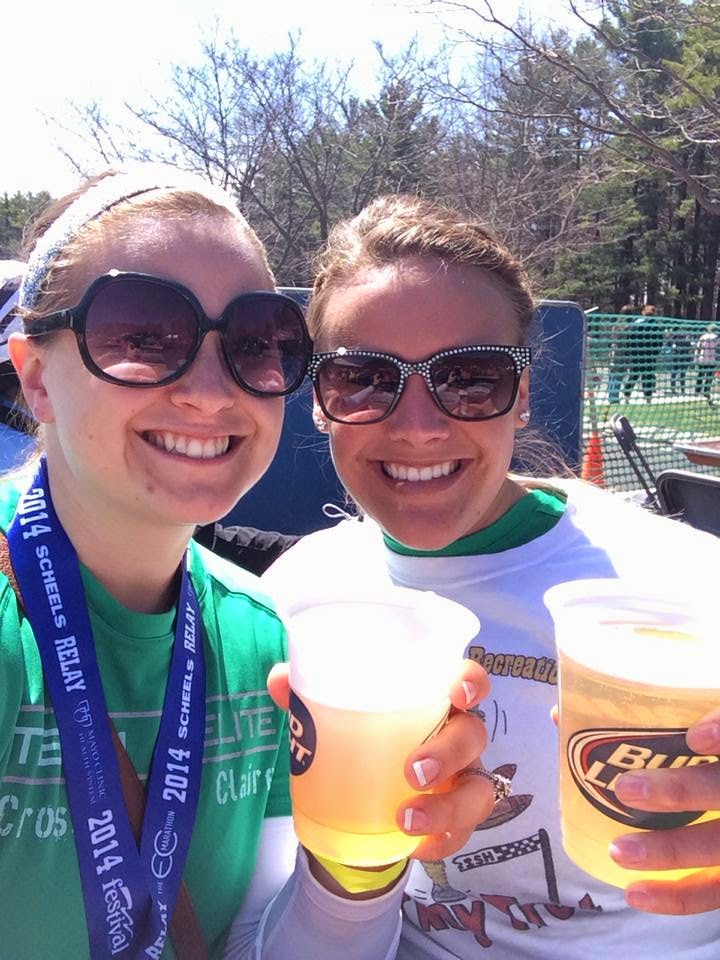 I've never had a beer post race before and apparently I've been missing out!  It was extremely refreshing and delicious.

This race was SO much fun.  The EC Marathon was organized by new owners this year and so many much needed changes were made... I couldn't have been more happy with how the race went!  All of the volunteers, spectators, and runners were amazing and I can't wait to be a part of the EC Marathon again next year!

DO IT WITH ME!  The EC Marathon has so many options… 5K, Half-Marathon, Marathon, and Marathon Relay.  Awesome medals, awesome apparel, awesome time.  See you in 2015!
Posted by Life After Morning Coffee
Email ThisBlogThis!Share to TwitterShare to FacebookShare to Pinterest