What an awesome past weekend in Milwaukee!  Since Terry was headed to Milwaukee for his bachelor party, I decided to head down for a girls weekend!  I left Friday afternoon with my mom and Renee!

We stopped in the Dells to fill up on gas, grab some coffee, and I tried my first ever Dunkin Donut!  I had the traditional sugar raised donut and a Bavarian Creme (I was obviously on vacation mode already and sometimes you just have to give in to the bad things in life).  YUM! 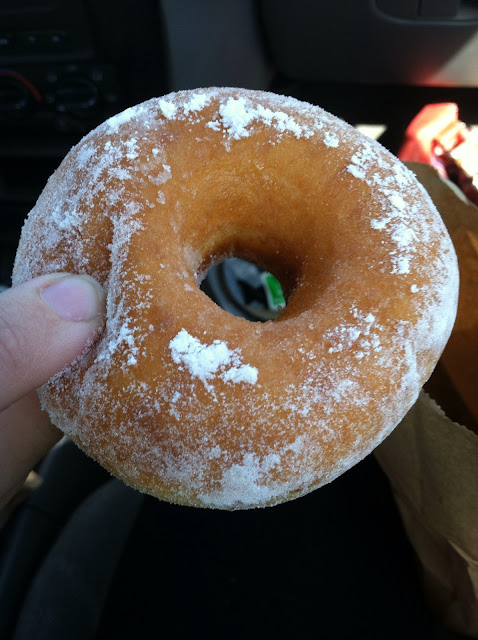 We had many different options for things to do on Friday evening, but we definitely were not going to the Brewer's game, since that's what the boys were doing.  Well, plans quickly changed when Mac's awesome boyfriend landed us second row tickets (his family has season tickets)!  I texted Terry to make sure it was okay and even compromised by saying he can have our seats for the last half of the game! 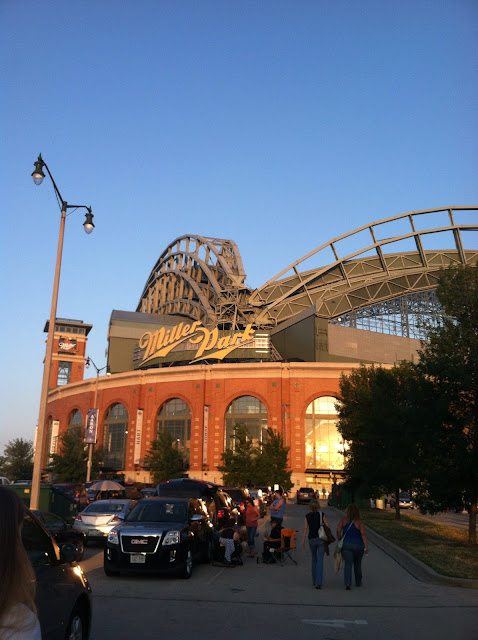 We met with them right away and gave them our box seats so they could go check out the game from the richie-rich part of the stadium.

Let's just say I fell in love with baseball right then and there with those seats... They were amazing!  How can you not like baseball with those seats!?  Also... I had perfect view of something good... 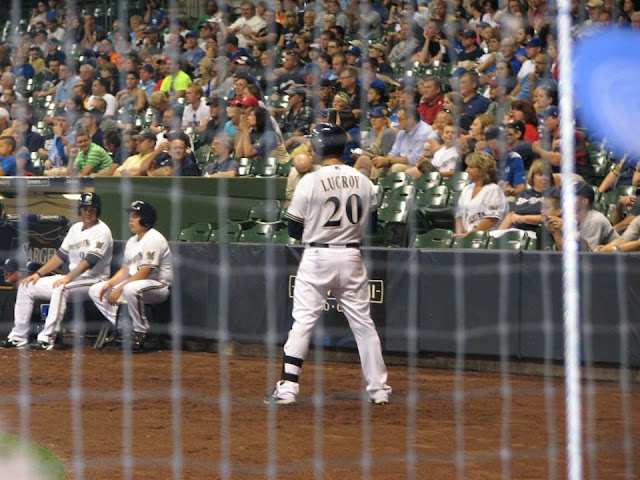 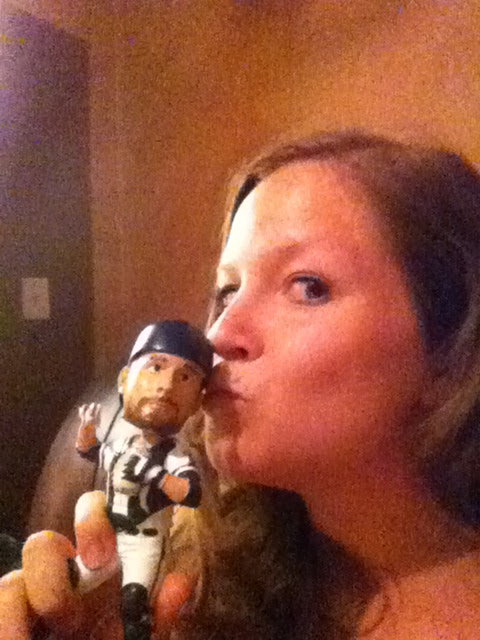 We started chatting with a couple who were sitting in front of us (in first row), and it turns out they recently got engaged and chose October 5th as their wedding date, just like us!  They said they were leaving by the end of the 5th inning, so we could have their seats.  The guys got FIRST row seats in front of us and witnessed the lovely Lucroy hit a home run for a Brewer's WIN! 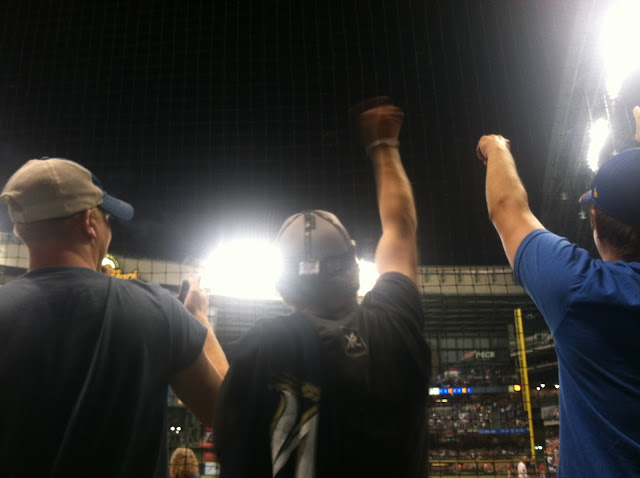 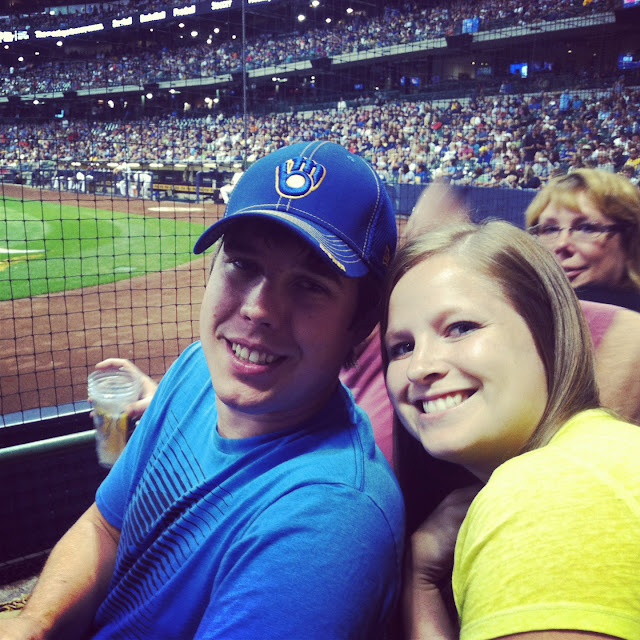 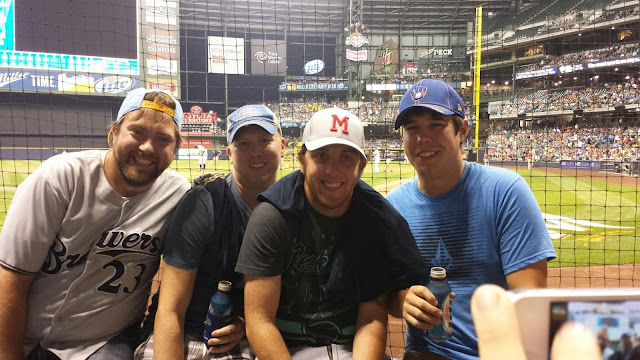 What an awesome game to attend for our first Brewer's game!

On Saturday, we woke up with a nice 3 mile walk/run then it was time for important things... 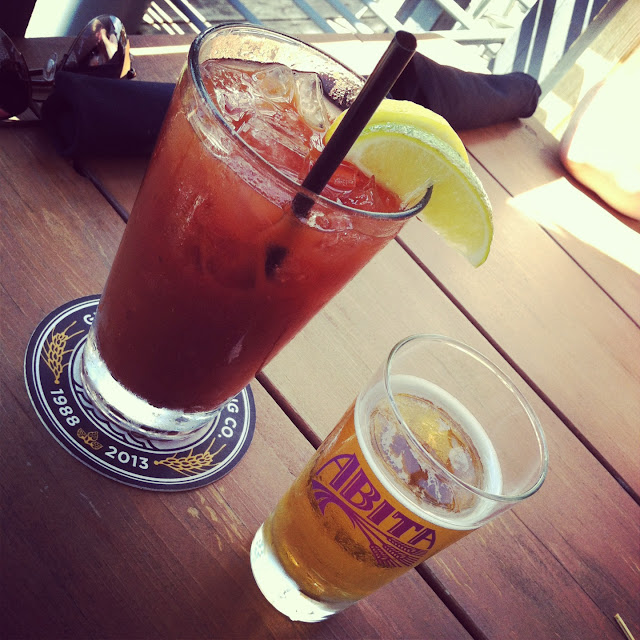 Brunch at Stubby's!  This bloody was delicious along with the food!  My mom ordered a Banana Creme Brulee Waffle (so good!) and I got the classic breakfast with two eggs, bacon, english muffin, and their famous Caiter's Tators.  Delicious start before heading to the Milwaukee County Zoo for the day. 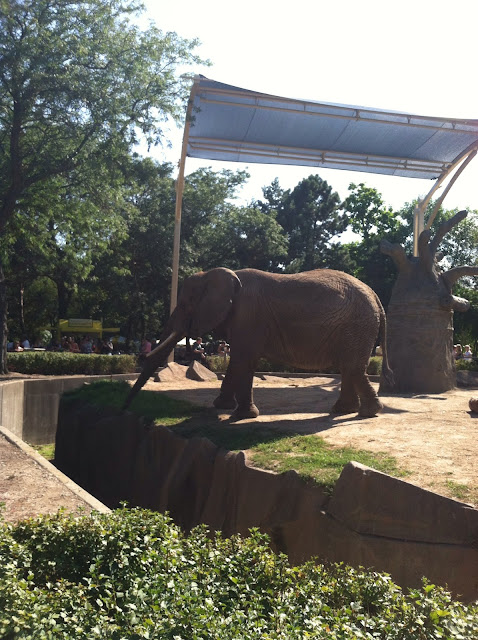 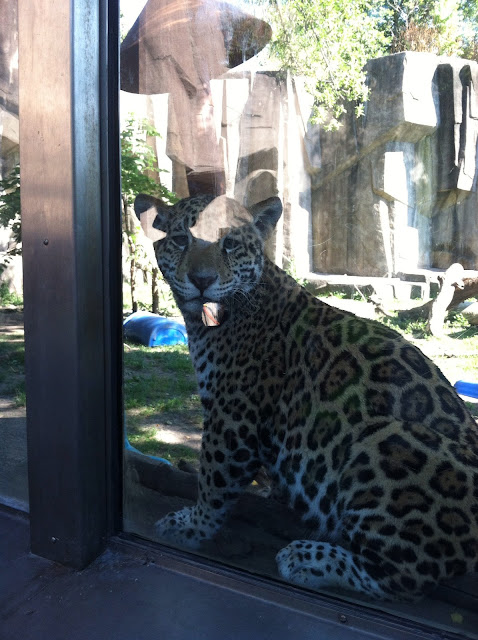 It was "A la Carte" weekend which meant restaurants from the area came with their popular menu items to purchase.  We tried some crazy things... like Fried Root Beer 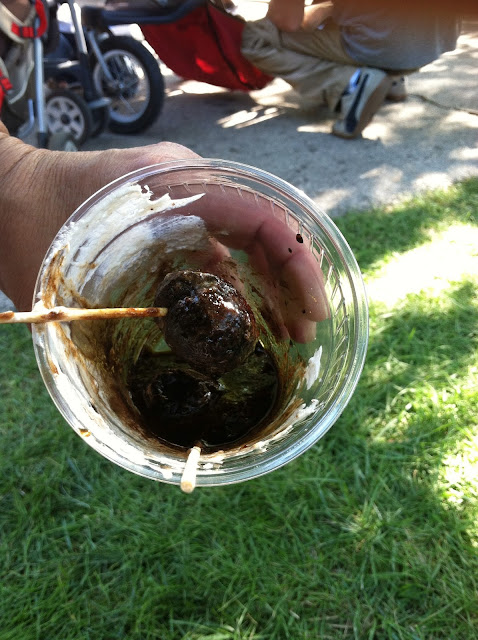 Let's just say... It wasn't my favorite.  I'll stick with the bacon wrapped water chestnuts that I had, mm mmmm.

I also experienced my first ever "Footsie Wootsie" massage! 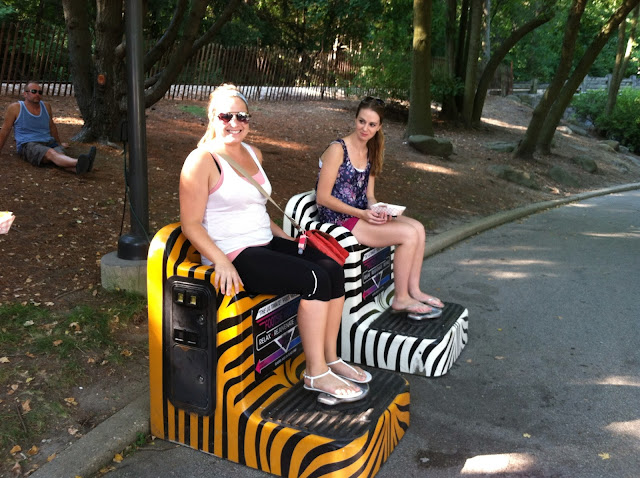 So rejuvenating!  The zoo was a lot of fun and my favorite part of it all was John (Mac's boyfriend) stated he felt like he was "herding cats" all day.  Trying to keep 3 women together and on track with plans is very difficult!  LOL!

After the zoo, we went back to Mac's place to meet up with Roni, have some drinks, and get all dolled up for a night out on the town.  It was fun to get all dressed up and do my hair and makeup.  I also enjoyed raiding Mac's closet and being able to fit into her clothes... Never thought that would happen. Ever.  Mac let me borrow a dress and we were off to the bars for a fun night out of drinks and dancing! 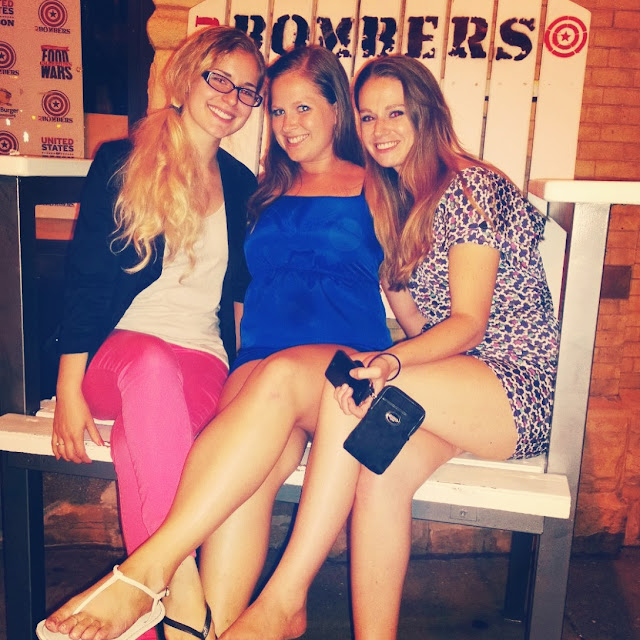 Who knew I still had it in me to stay awake until after 3AM?!  Not me!  I was ready for one thing and one thing only once I woke up on Sunday morning... 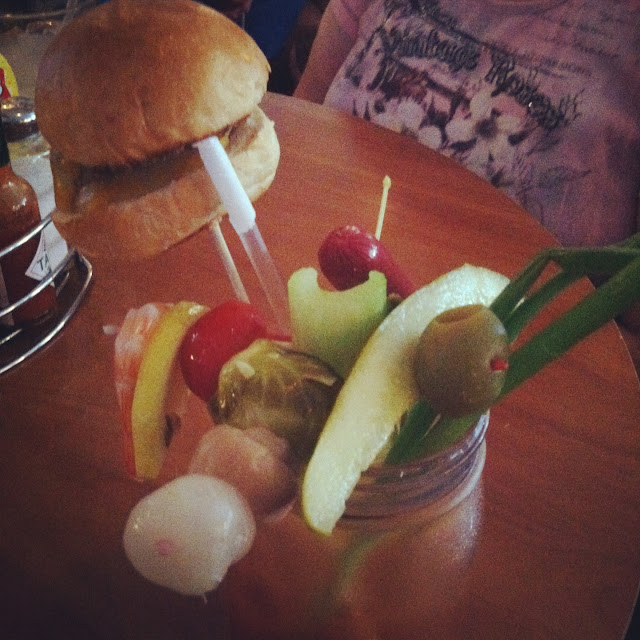 More bloody's!  We went to the world famous Sobelman's for their "Bloody Masterpiece!" It hit the spot.

We stopped at Gloriosos and Whole Foods Market before heading back north to Eau Claire!  It ended up feeling like a long car ride and I couldn't wait to be home and see Terry.  I also couldn't wait to have these little pups back in my arms after a long weekend away from them. 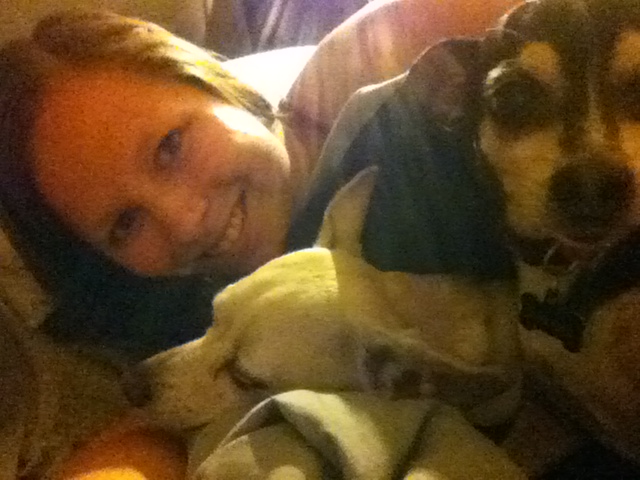 My dad took Parker and Carmelita up north to the lake for the weekend so they had a blast running around and lounging in the camper.  As a thanks for watching them, I made sure to pick up an Apple Turnover from Parker and a bar from Carmelita from Whole Foods Market. 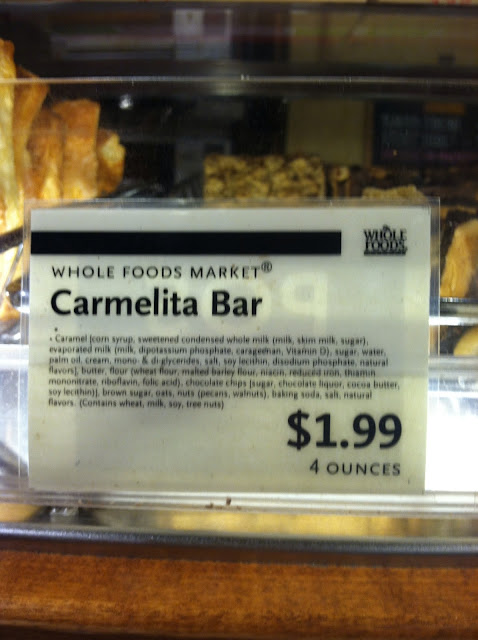 Long weekend = long post!  Only two weeks until all of my girls will be in town and we will be celebrating my bachelorette party!  This weekend was definitely a warm up to what will be a jam packed weekend of a fun at the end of the month :)


Posted by Life After Morning Coffee
Email ThisBlogThis!Share to TwitterShare to FacebookShare to Pinterest